When you watch the news it all seems so smooth- a presenter presents, then a reporter reports, then the credits and the adverts roll. But behind the scenes there is a machine running 24 hours a day, seven days a week to maintain that illusion of effortless broadcast. The machine is constructed from many different moving parts and characters, chugging along as they strive to deliver content that will keep the audience entertained. Uganda’s media landscape, though vibrant and fast-paced, is a tough market. Its consumers demand the truth, while the state often finds that same truth inconvenient or unsuitable. The competition is stiff, with barriers to entry dropping as new technologies make slick production more accessible and affordable every day.  Journalists often face danger as they carry out their duty of bearing witness in risky places. The commodity they produce goes out of date if it’s kept too long, and sometimes it’s dangerous to collect. But every day they pile into their cars and rush off to all corners of the city and the country, hunting for stories that will get a response from their viewers.This project is an exploration of what it takes to make that happen, capturing the complicated ecosystem between directors, producers, anchors, cameramen, technicians, the control command center, the fleet and, of course, the administration. I joined Nation Broadcasting Services (NBS) as an intern in 2017, later graduating to a position as a content photographer, and through my career with the company I have come to greatly appreciate the intricacy of the machine that I am a part of. NBS produces a wide range of content every day, from entertainment and political talk shows to in-depth investigations and breaking news reports. All of this just to make sure that when you sit down on your sofa, there’s something engaging on the TV. 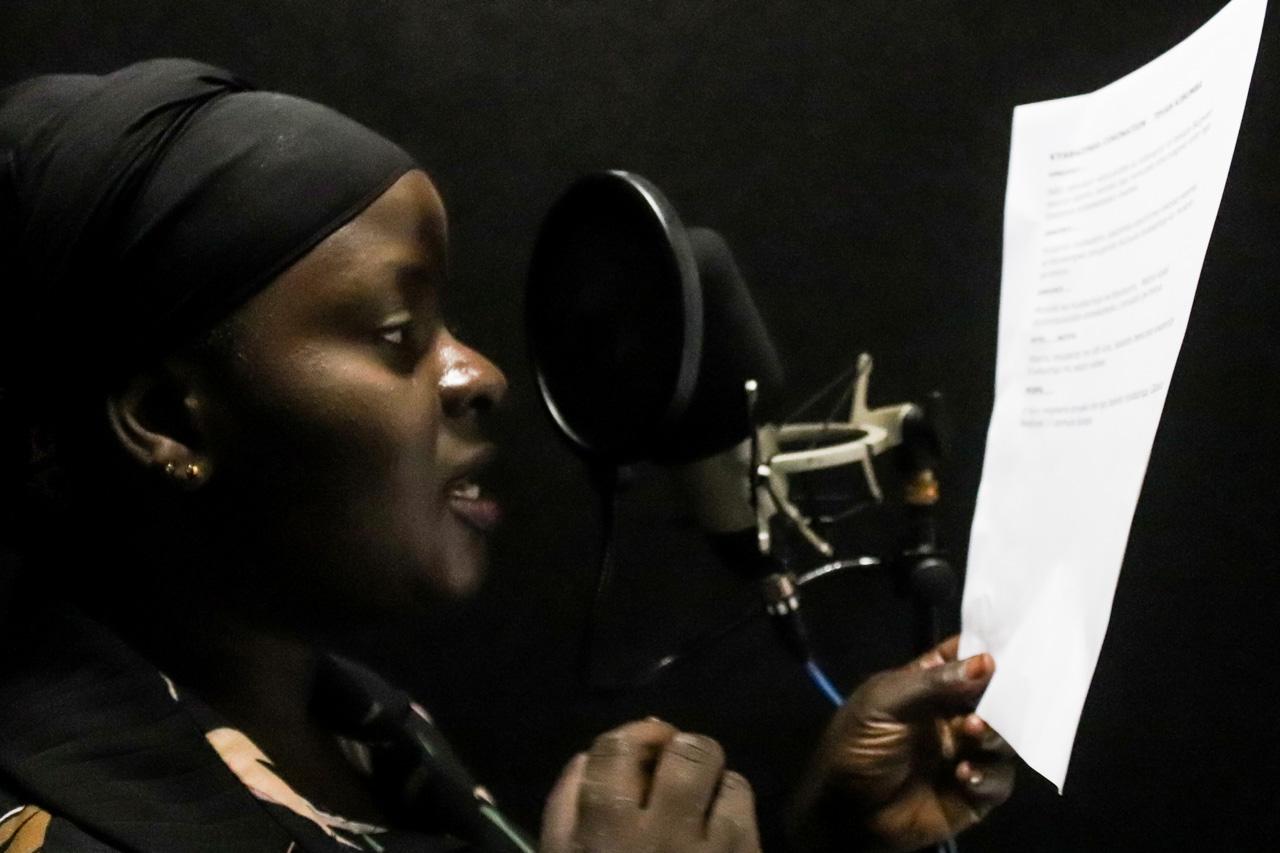 Luganda News Reporter Aminah Nabukenya voices her story in preparation for the Amasengejje bulletin, a Luganda-language news show that airs daily on weekdays at 7pm. Owing to its accessibility the bulletin is popular with Kampalans and central Uganda. 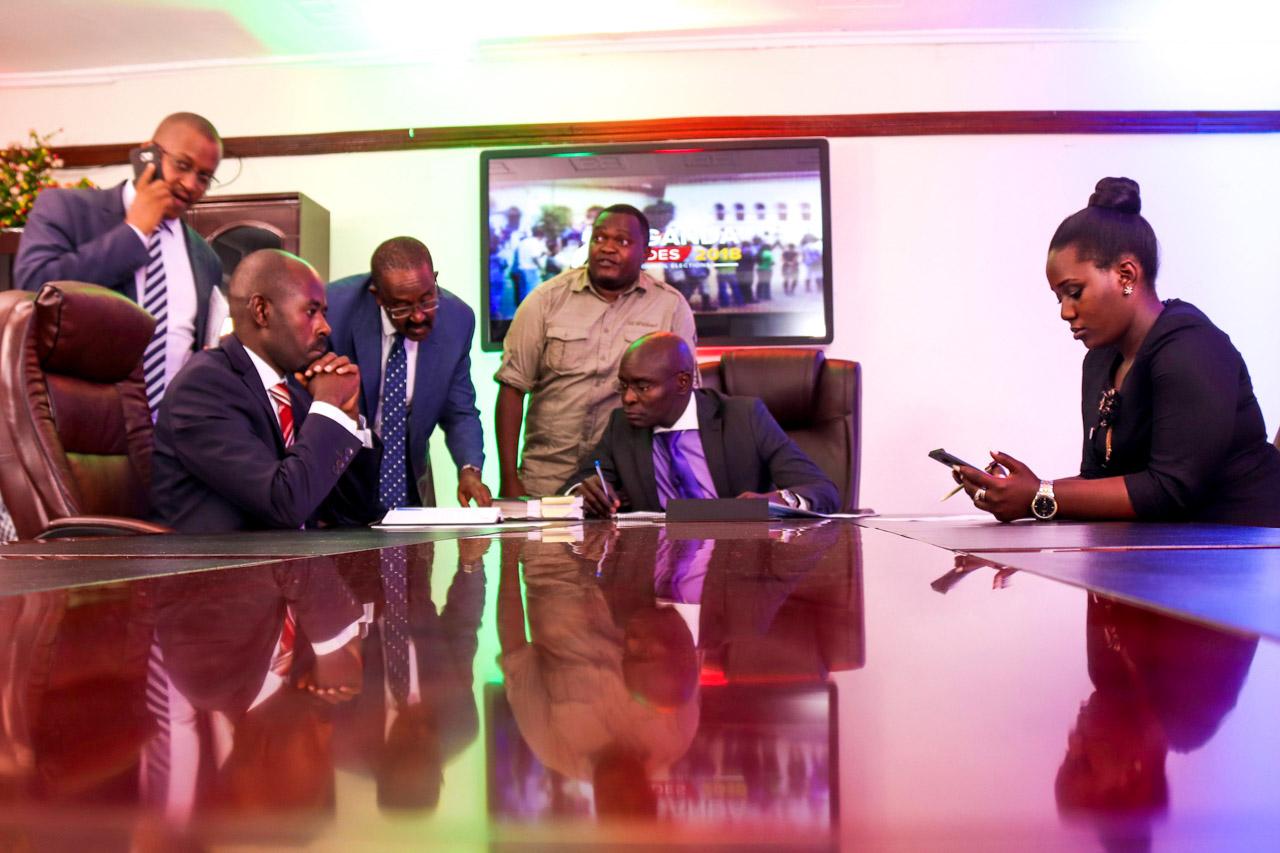 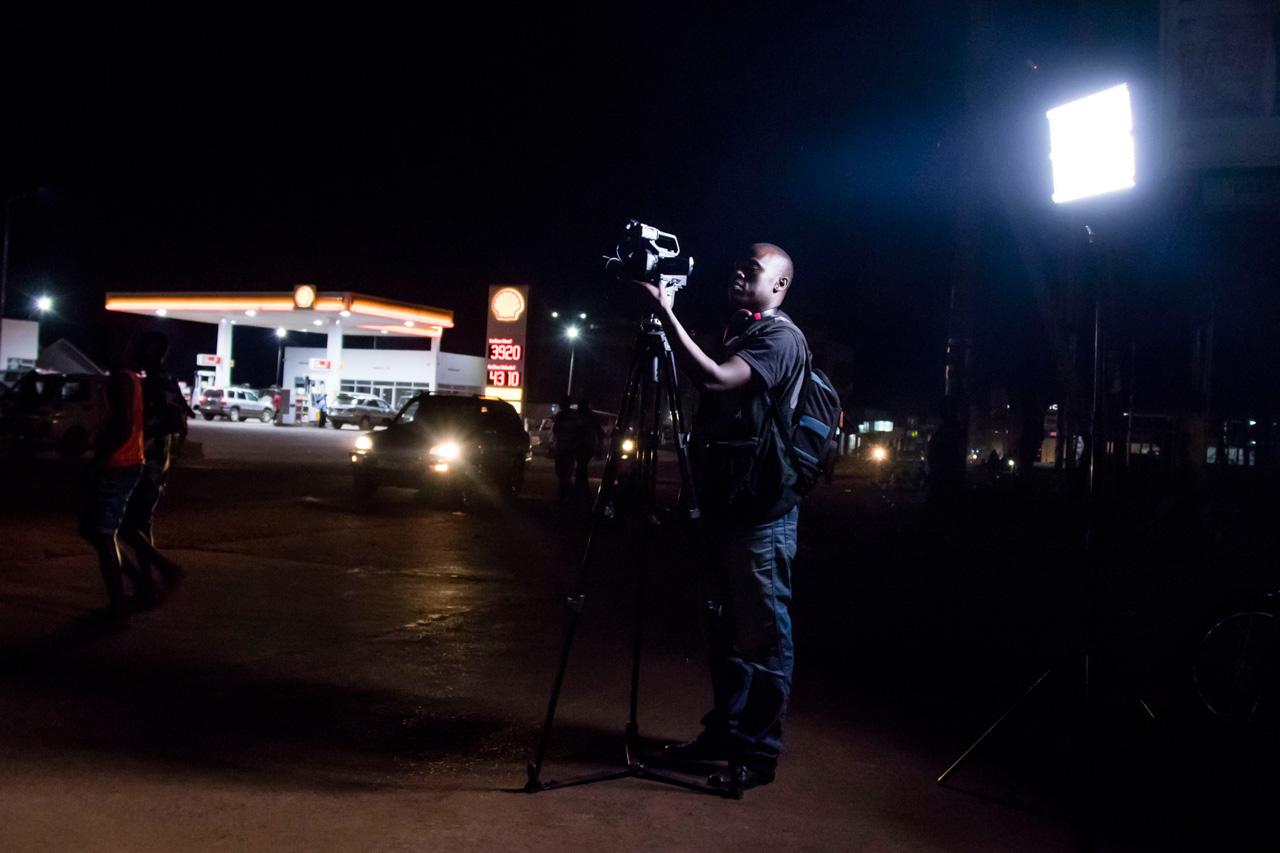 NBS cameraman George Wesswa records a live link on a street in Gulu, Northern Uganda, at 8pm in preparation for a segment on social relations in the city, to be aired on the “Live At 9” bulletin. 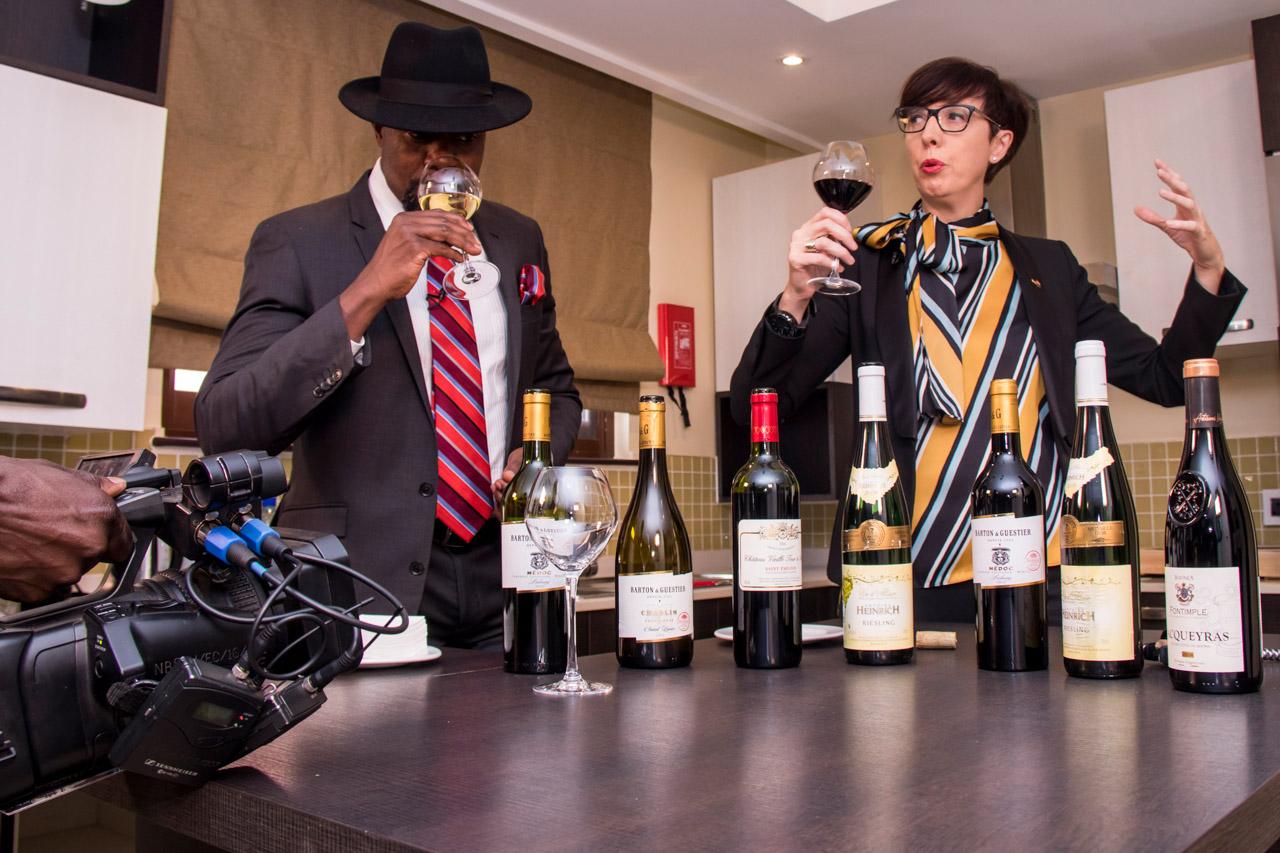 News anchor Samson Kasumba (left) takes a sip of a sweet white wine during filming of a program with the Ambassador of France to Uganda, Stephanie Rivoal as she describes how the French take their wine. The program is a partnership between the French Embassy and NBS Television. 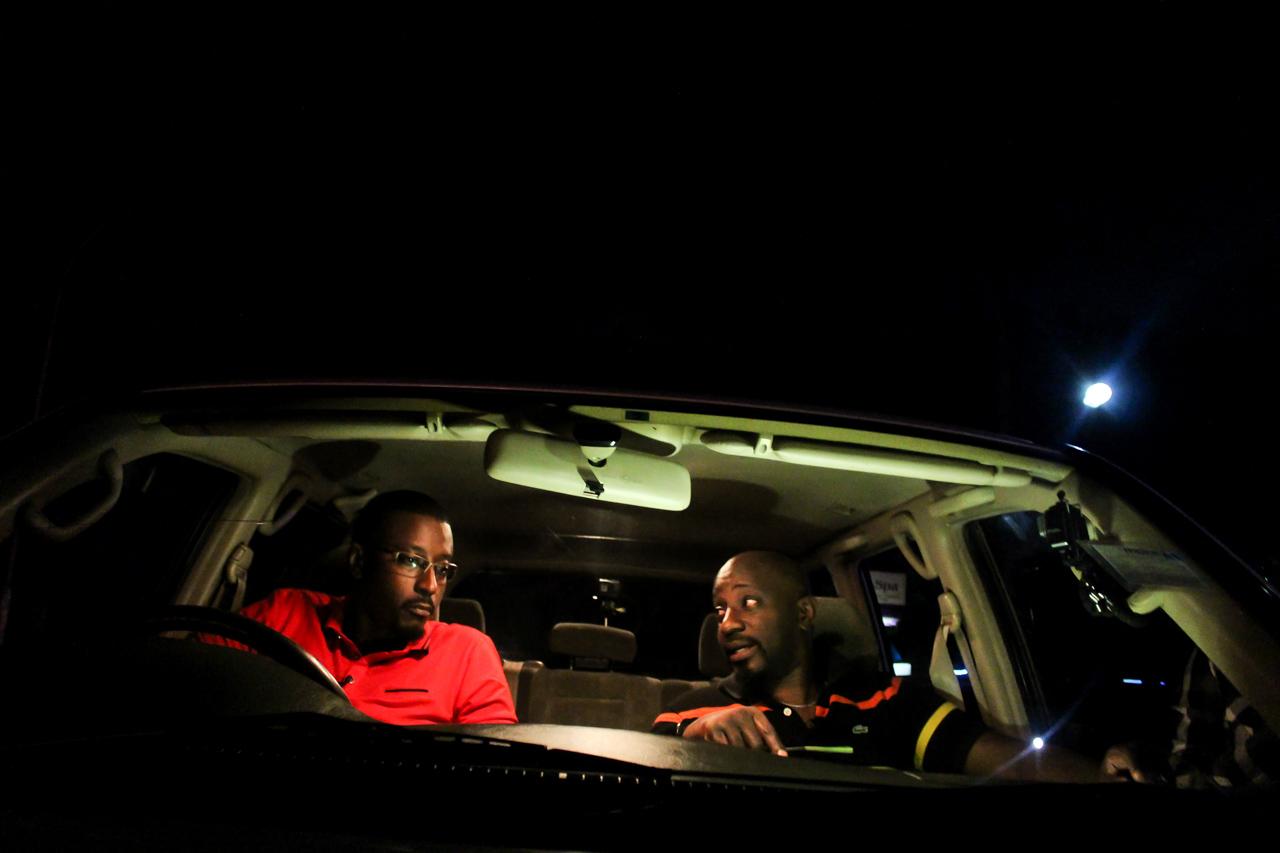 Marcus  Kwikiriza and Gaetano Kagwa of the NBS show ‘Another Round’ get into character for a scene set in a car, filmed along the new Entebbe Expressway. 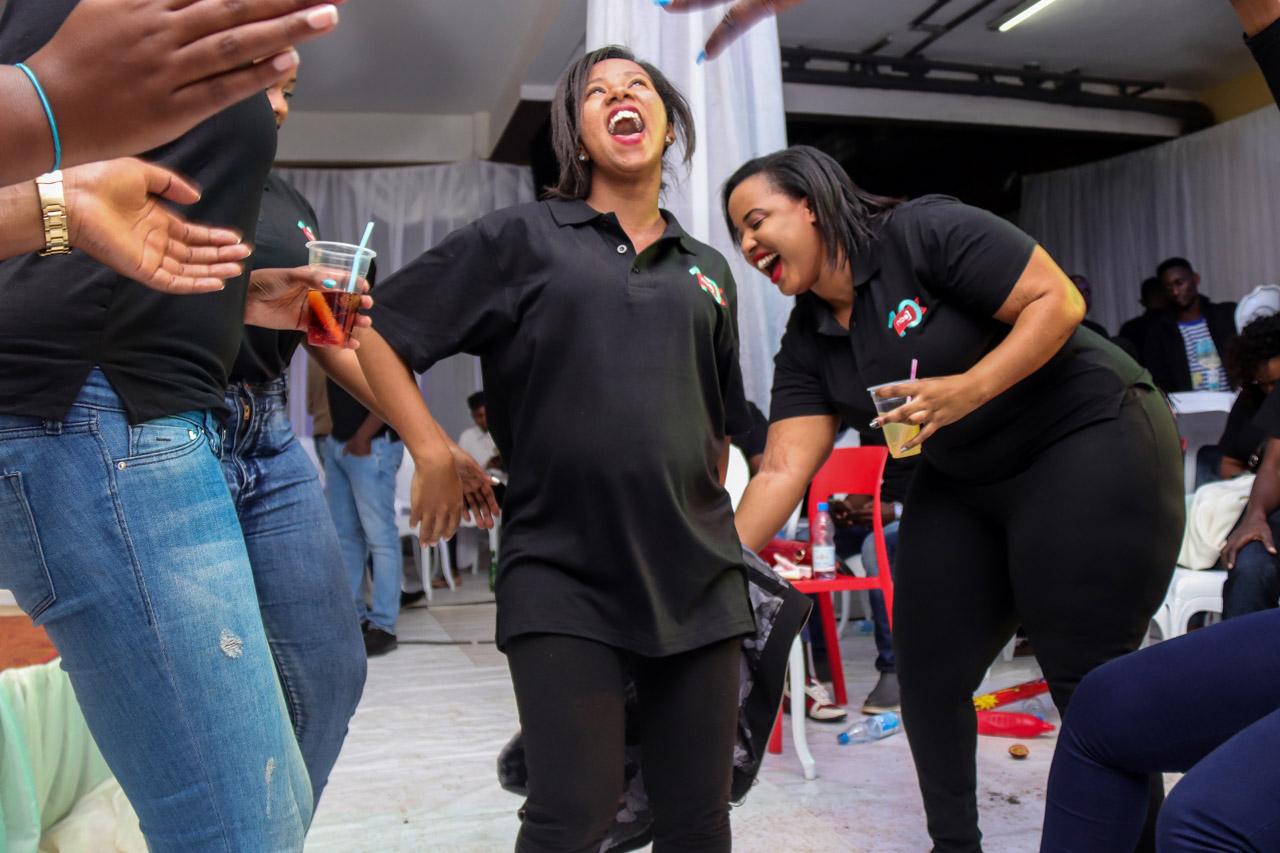 Employees of NBS dancing and having fun during the network’s 10th anniversary celebrations. 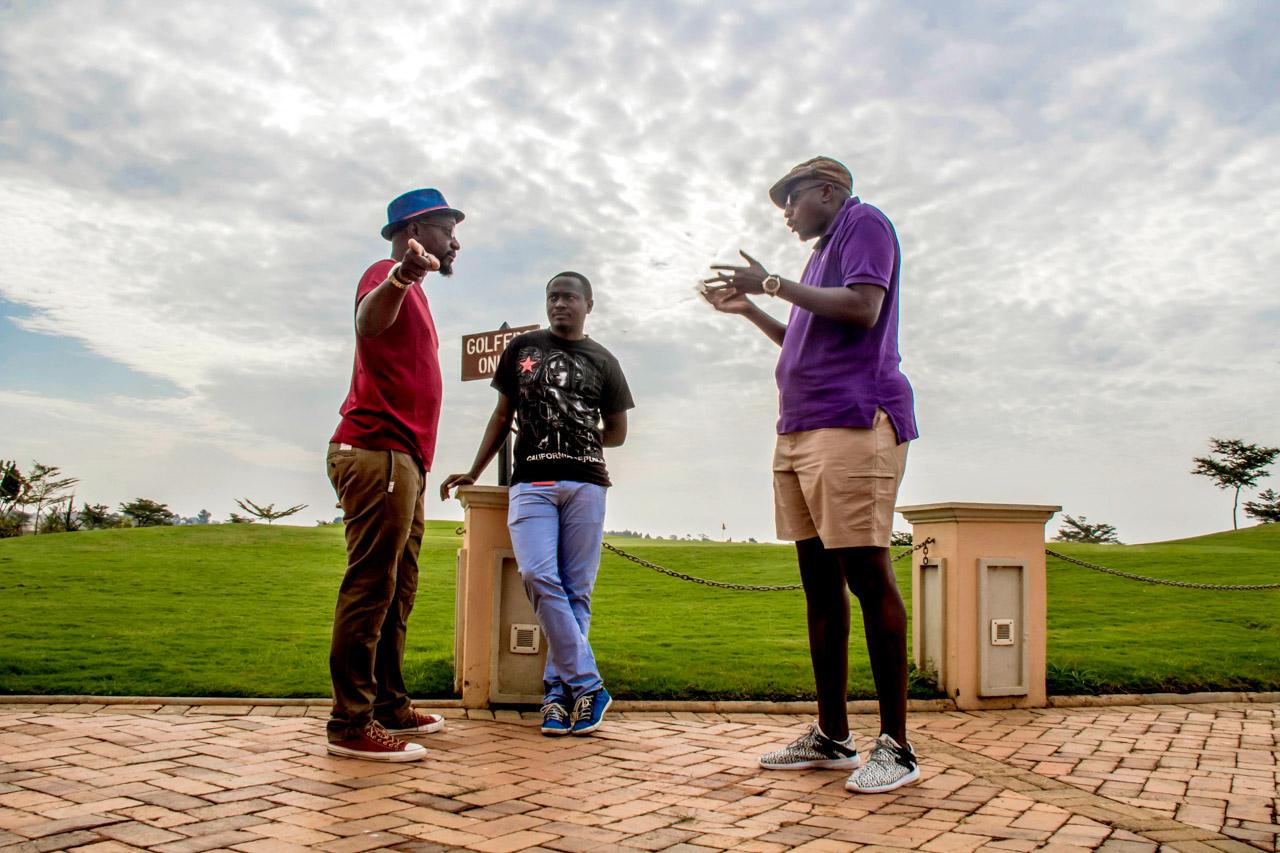 The crew of Another Round are pictured laughing after Gaetano cracked a joke while filming on a boat cruise. 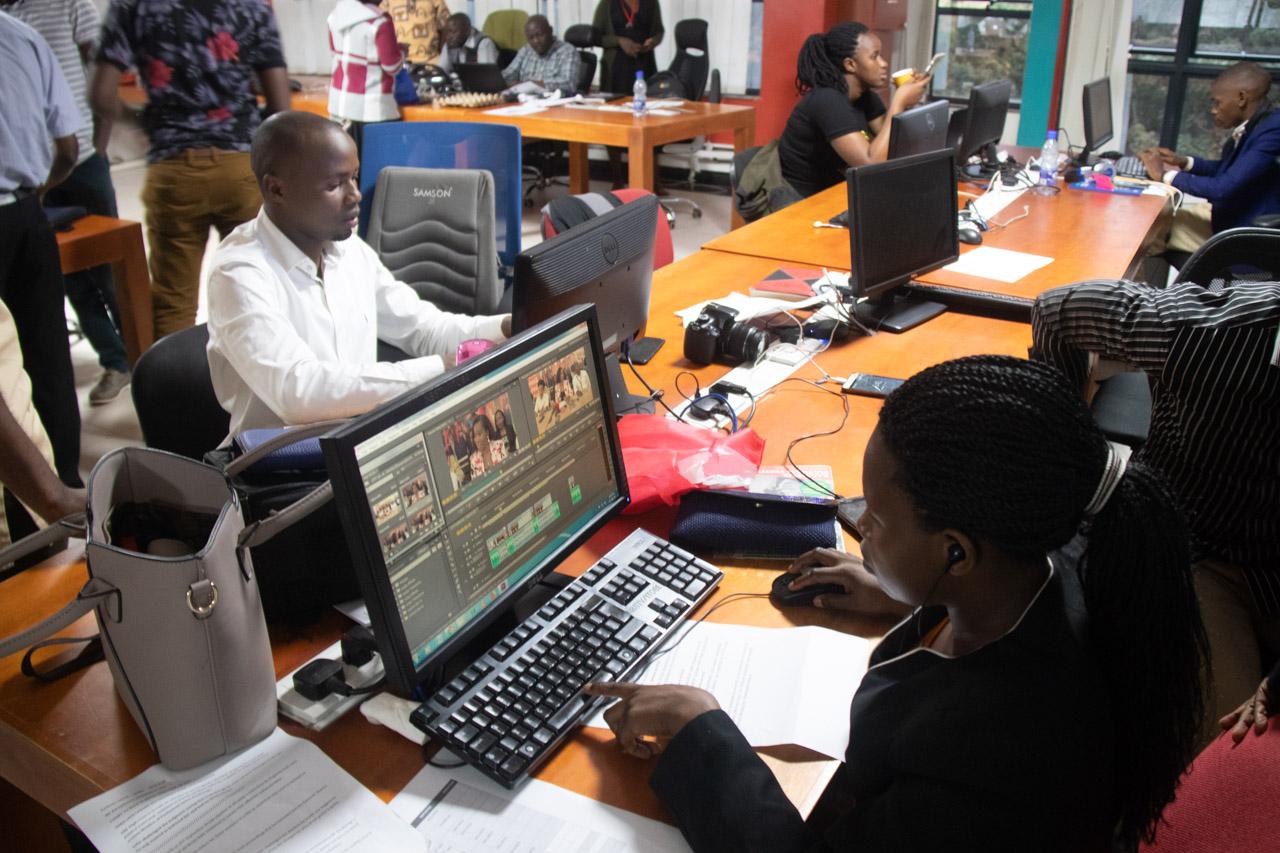 In the newsroom a video editor applies post production to video footage which will be aired on the Amasengejje bulletin. 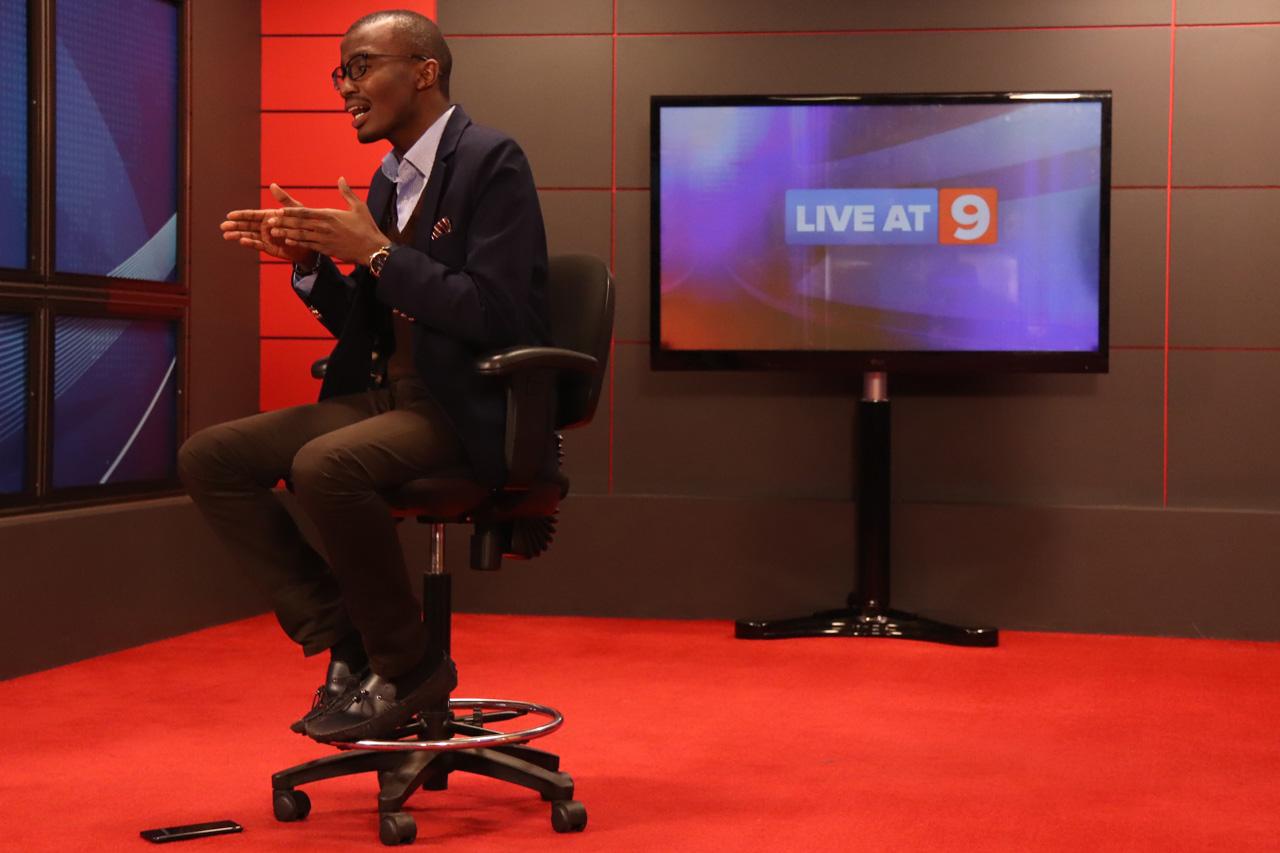 Senior investigative journalist Raymond Mujuni gestures emphatically during a segment about the station’s “Fake News” campaign during a recording. 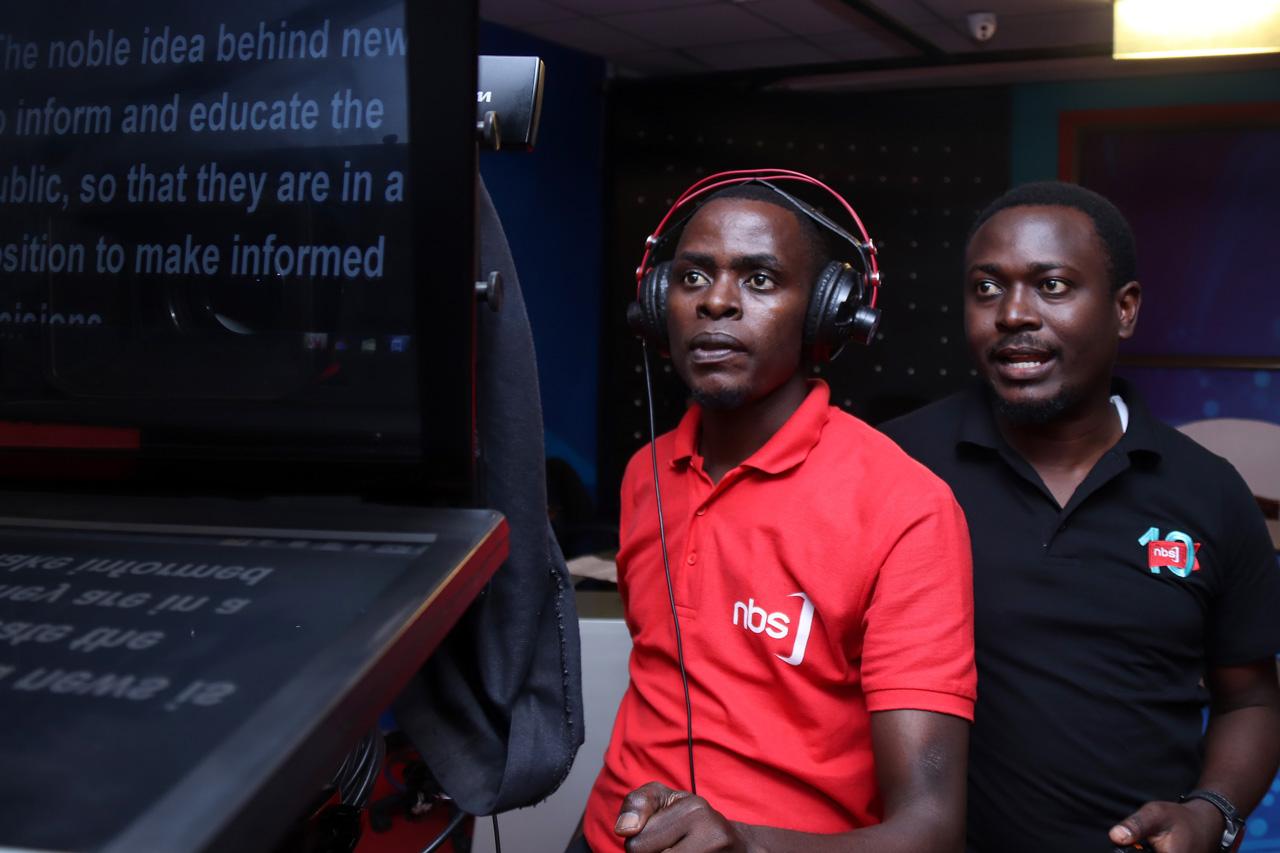 Studio cameraman Agrey Waguma (red shirt) and his director watch the live view from a camera as they discuss what positioning they will use during taping. 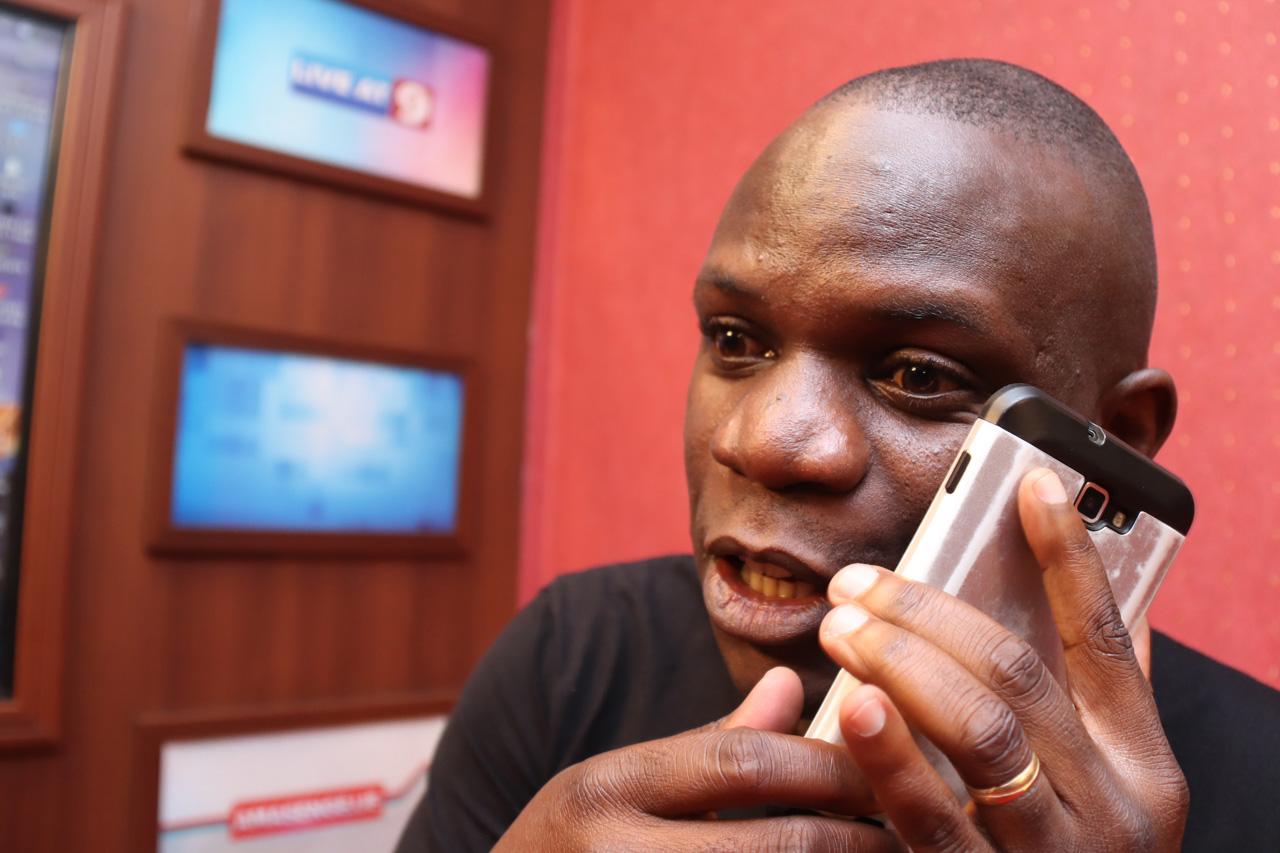 Sports presenter and reporter Michael Kigozi takes a rushed phone call while on set for his “Lunch Time Show” program. 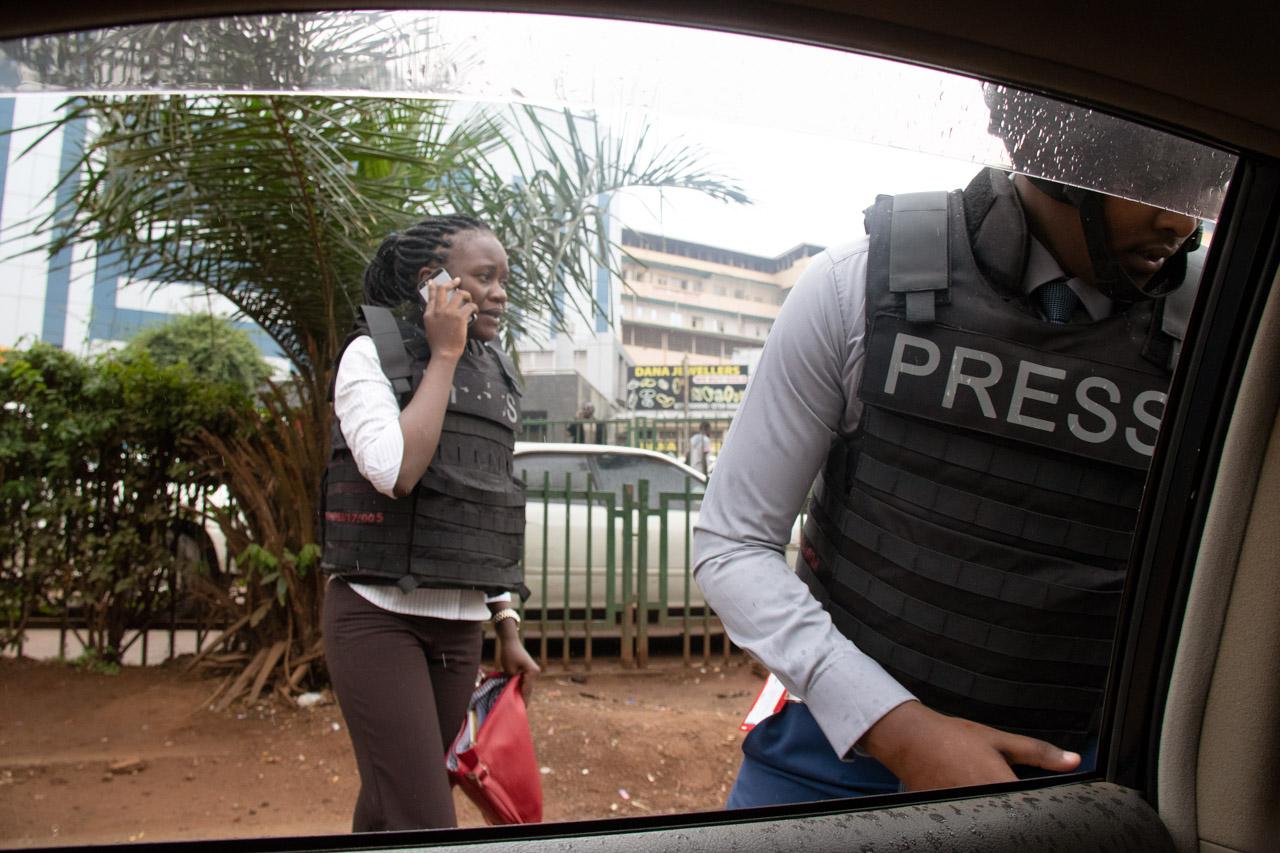 A light drizzle falls as reporters Violet Namata and Canary Mugume prepare to cover a protest against a new social media tax in Nakasero, central Kampala. 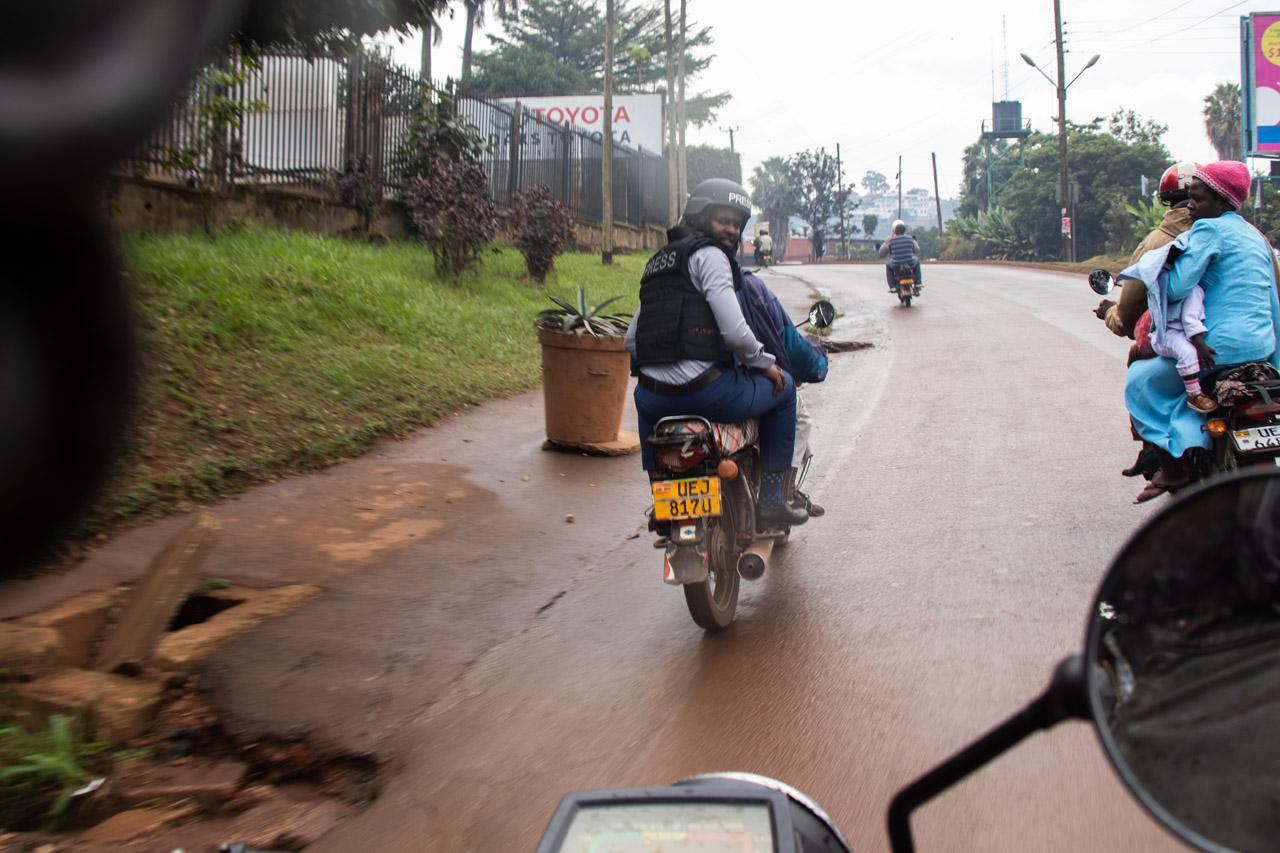 Senior news reporter Canary Mugume returns to the NBS offices in Kamwokya by motorcycle taxi after reporting on the social media tax protest. 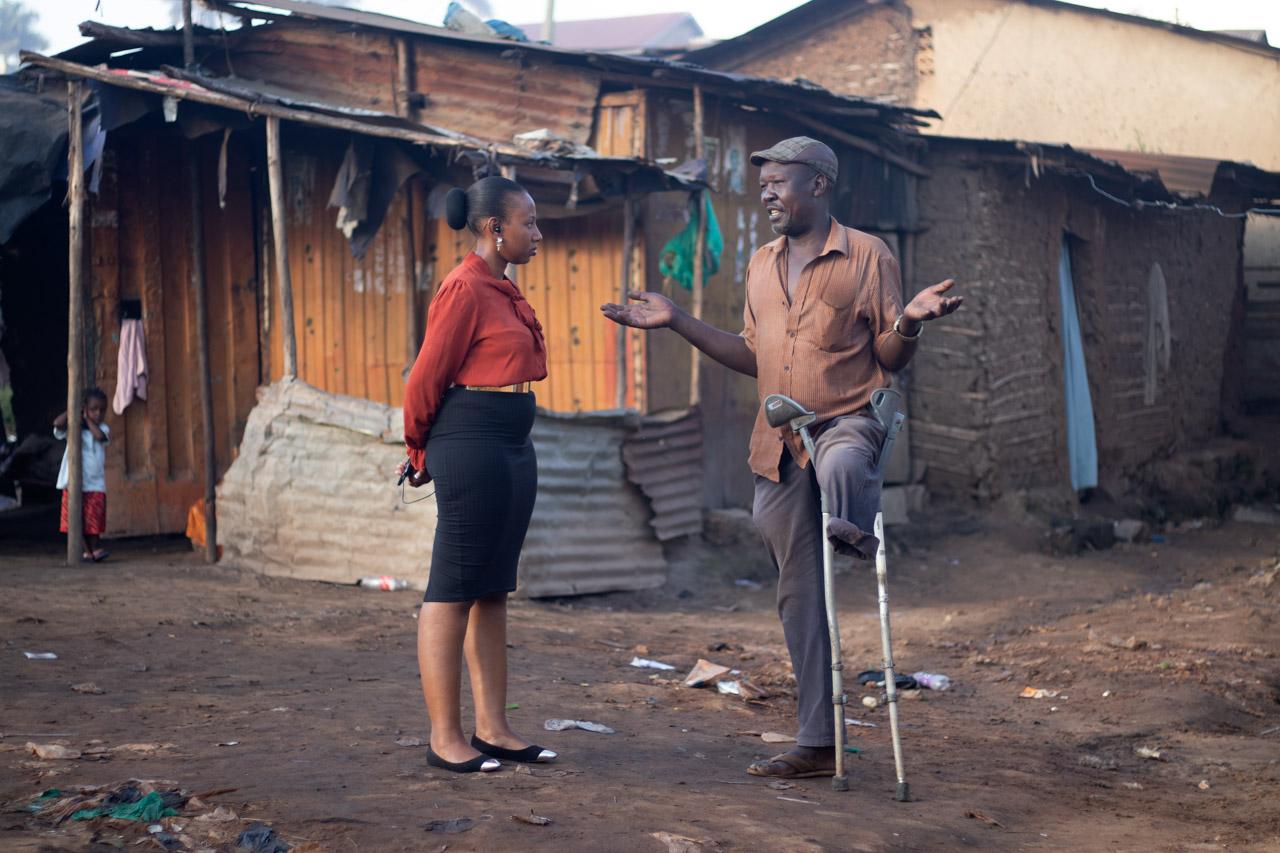 News reporter Victoria Bagaya listens during a conversation with a retired soldier in Kikaramoja zone, Kampala, as he explains to her about his life in the army and how he lost his left leg. 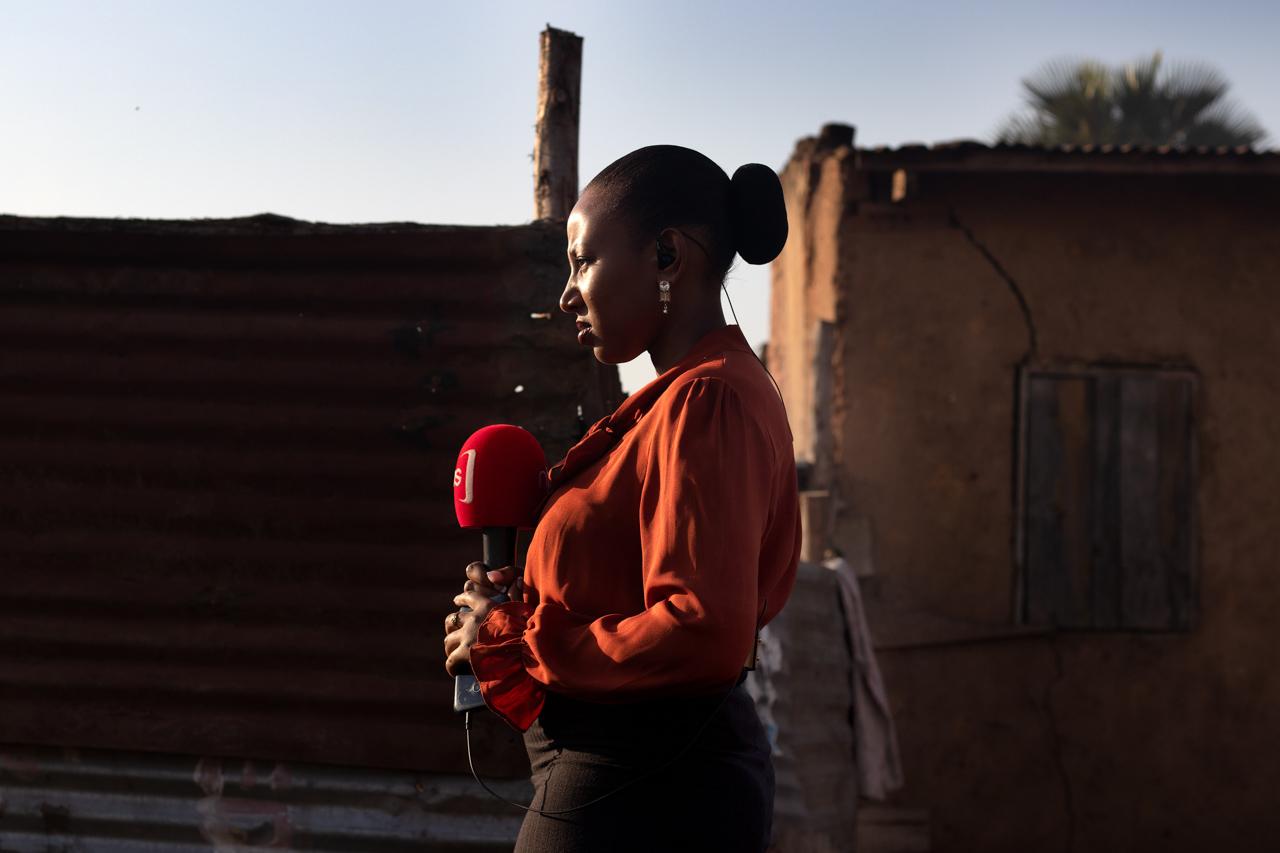 Reporter Victoria Bagaya on standby minutes before she goes live on TV. 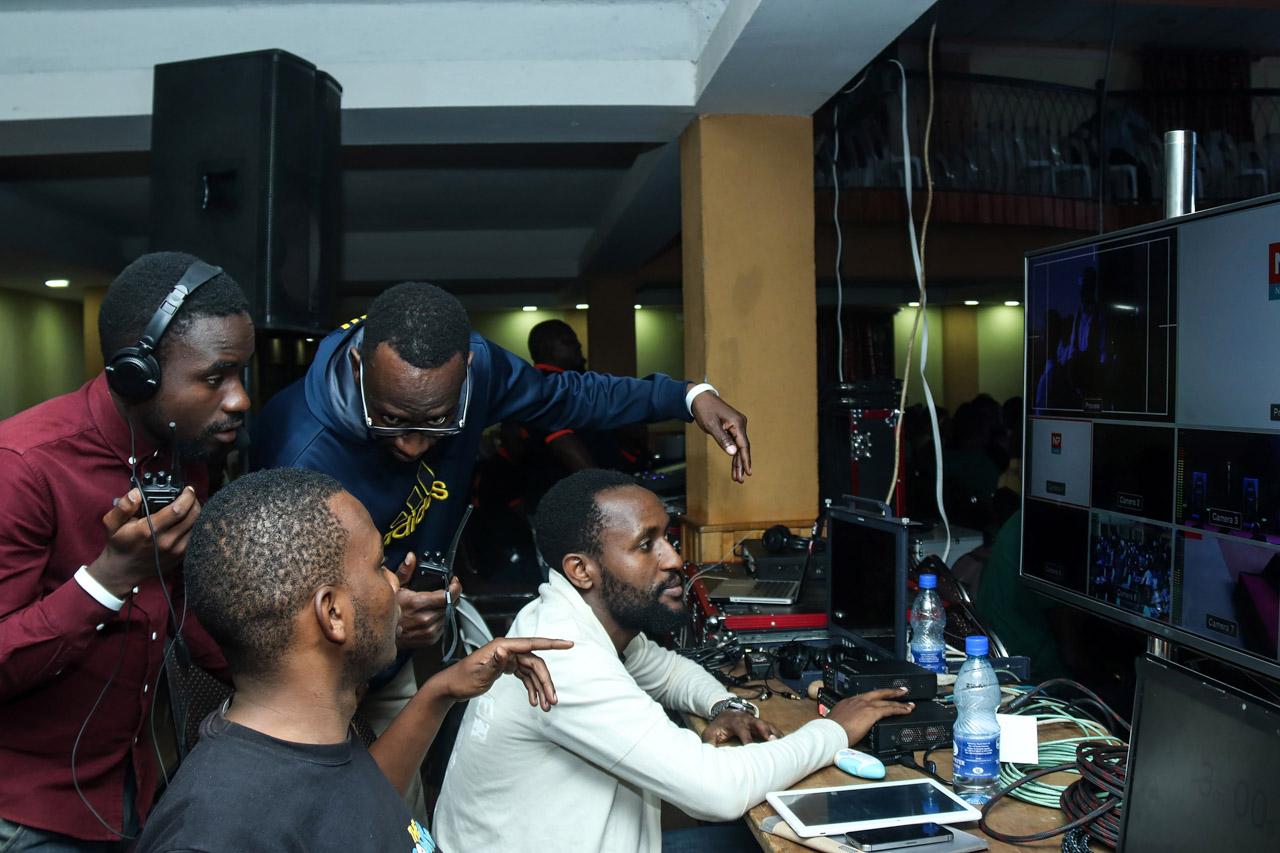 The Control Centre team monitor the feed during the Comic Show act. 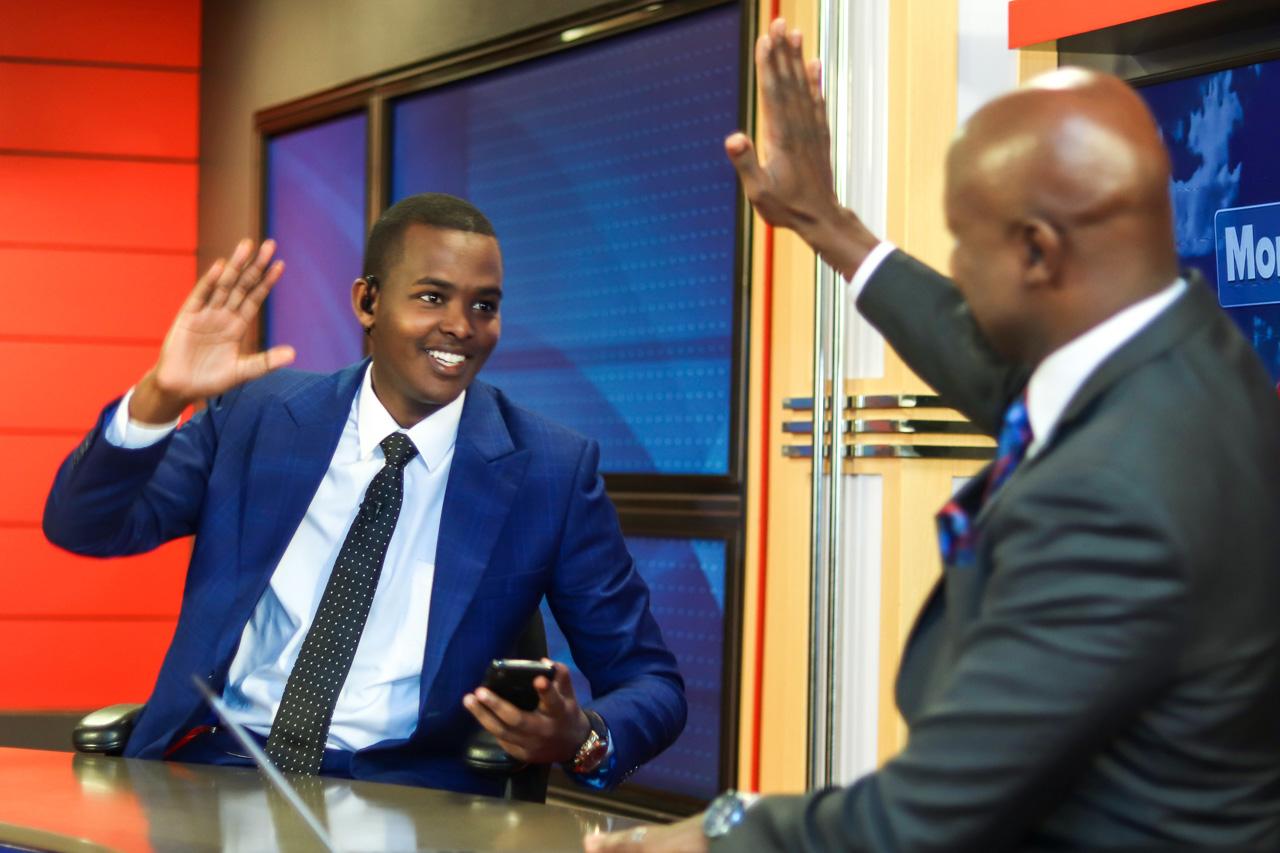 Canary Mugume (left) and Samson Kasumba high-five on Morning Breeze after a funny comment made by Samson, who anchors the show. 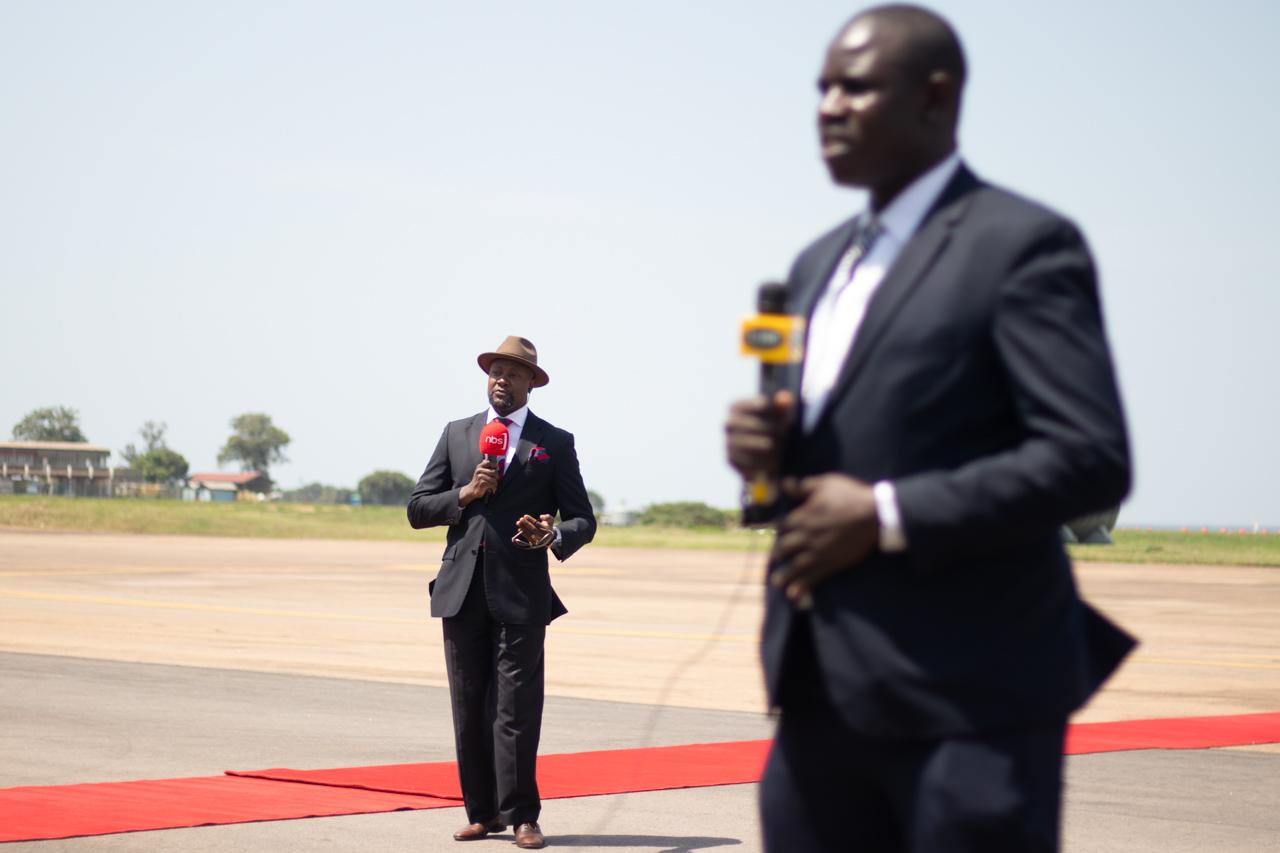 Senior reporter and anchor Samson Kasumba and another news reporter stand on the tarmac at Entebbe airport, recording updates on the arrival of the Indian Prime Minister to Uganda. 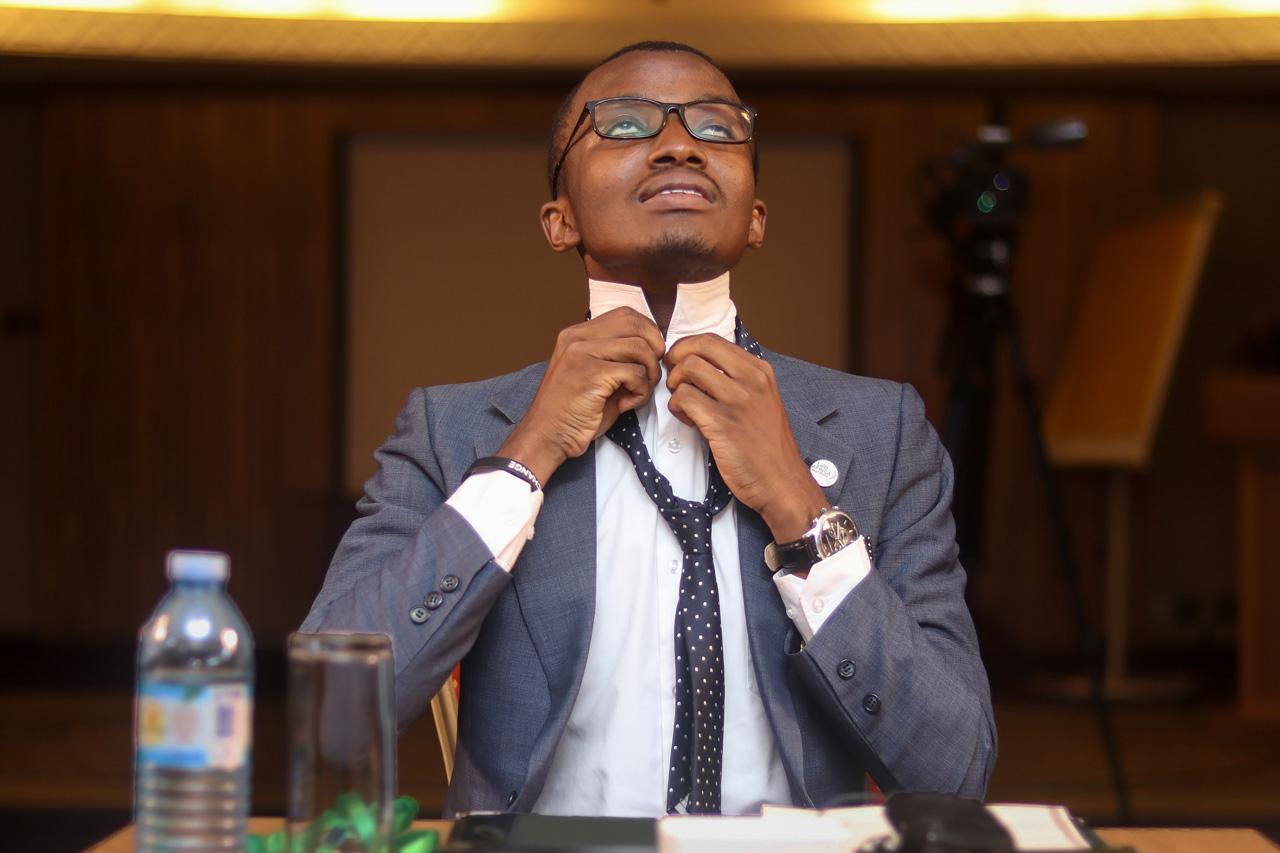 Senior investigative journalist Raymond Mujuni puts on his tie in preparation for an update with security officials. 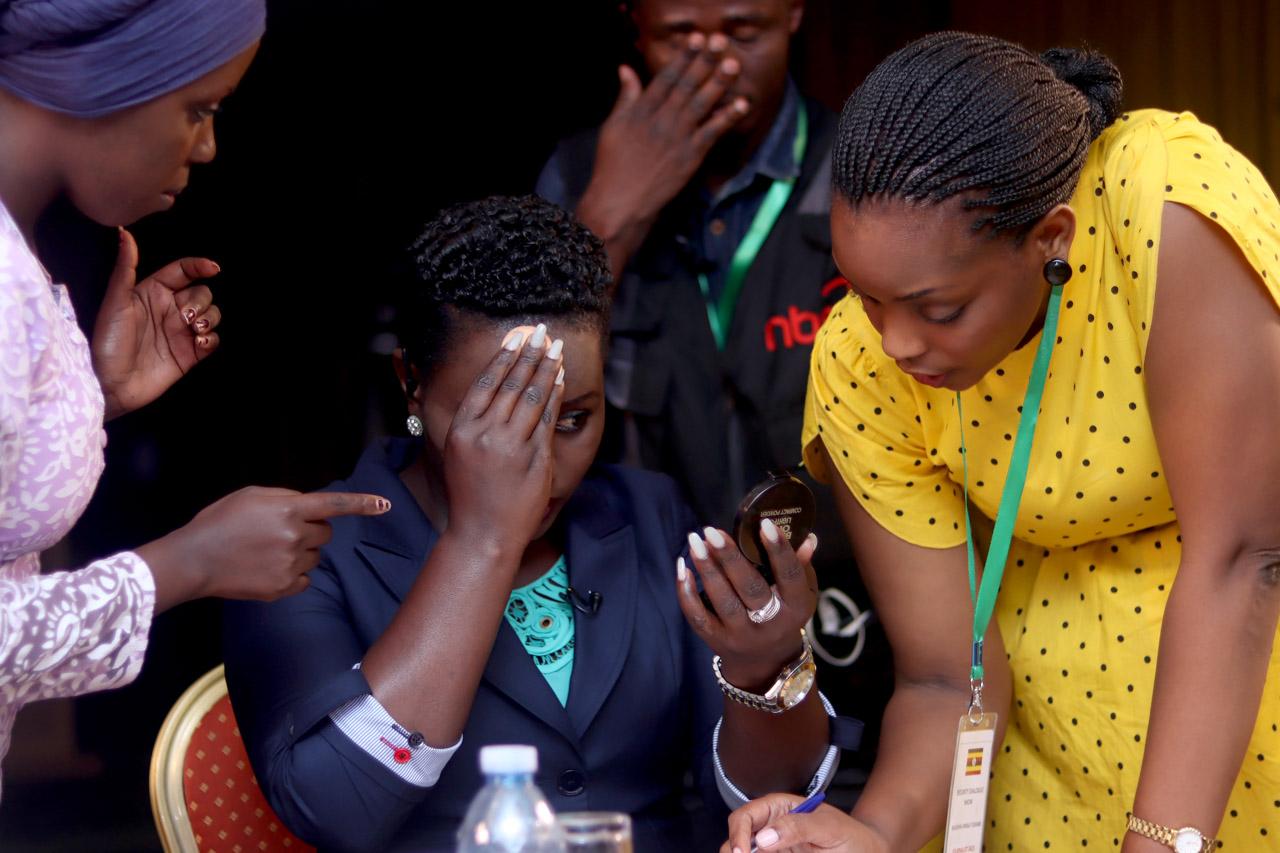 Senior journalist Mildred Tuhaise (centre) refreshes her makeup during a short break in filming as her director (in yellow dress) takes her through the key points for the next segment.